Close
Home > Blog > Why You Shouldn’t Talk to the Police

Why You Shouldn’t Talk to the Police 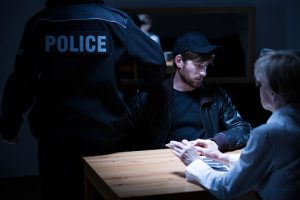 The Fifth Amendment of the Bill of Rights states:

“No person shall be held to answer for a capital, or otherwise infamous crime, unless on a presentment or indictment of a grand jury, except in cases arising in the land or naval forces, or in the militia, when in actual service in time of war or public danger; nor shall any person be subject for the same offense to be twice put in jeopardy of life or limb; nor shall be compelled in any criminal case to be a witness against himself, nor be deprived of life, liberty, or property, without due process of law; nor shall private property be taken for public use, without just compensation.”

Many people sum up the late 18th-century legal language to mean that you have the right to not testify against yourself. The reasoning behind the amendment was to allow defendants the right not to be prosecuted due to offhand comments, especially truths taken out of context.

This is why Justice Robert Jackson once stated in Watts v. Indiana, 338 U.S. 49, 59 (1949) that “any lawyer worth his salt will tell a suspect in no uncertain terms to make no statements to the police under any circumstances.” There’s simply no way that it can be beneficial for a multitude of reasons, such as an officer forgetting statements that were made or a prosecutor using an offhand comment about a victim as a possible motive.

Miranda Rights are stated for a reason, as the idea that “anything you say can and will be used against you in the court of law” is true to an incredible degree. The importance of the Fifth Amendment is explained in-depth by Mr. James Duane, a professor at Regent Law School and a former defense attorney in a lecture to his class. In the lecture, Mr. Duane gives many examples of how speaking to the police can backfire by allowing a cop to use statements against suspects in court.

Contrary to the popular belief that if you’re innocent then you have nothing to hide, speaking to police is never a good idea. Human memory is not always a reliable source but a memory can nevertheless be the deciding factor in a case, especially considering the weight police testimonies hold in court.

Exercising the rights afforded by the Fifth Amendment can prevent a frivolous investigation that can ruin someone’s life. An innocent person going to jail is not unheard of and sometimes these people lose decades of their life that they can never get back.

If you are facing charges, you might feel overwhelmed. You may have been told your case is "hopeless." Understand that you have legal options. Talk to Michael P. Manley today so he can begin helping you with a strategy designed to get results.