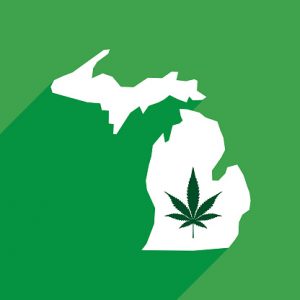 Proposal 1 was approved by Michigan residents. The new law, called the Michigan Regulation and Taxation of Marihuana Act (MRTMA), went into effect on December 6, 2018. This means the use of recreational marijuana is legal in Michigan with regulatory oversight from the Michigan Department of Regulatory Affairs (LARA). But what does this mean? What are the new rules?

What’s legal and what’s not?

First off, it’s important to understand what’s legal and what’s not. In order to use marijuana in Michigan, you must be at least 21 years of age and may not be in possession of more than 2.5 ounces in public. You are, however, allowed up to 10 ounces (or 12 plants) in a private home, with the requirement that it is hidden from public view.

Marijuana may not be used in public, in the vicinity of a K-12 school, or on federal land. Additionally, you may not drive while under the influence of marijuana.

The use of marijuana may also be banned from certain properties, such as college campuses, businesses, or an apartment managed by a landlord.

Interpretation of the law

If you are a medical marijuana patient, recreational user, distributor, or caregiver, you may think you are in compliance with the law, and you most likely are. However, the law is such a gray area that it can be interpreted differently from one county to the next.

According to attorney Leach, “There are different protections for someone who is a patient or a caregiver versus someone who is going to be using it recreationally or as an adult. And I think for those people who are patients and caregivers, I think it’s important to maintain that status as a patient and a caregiver because there are those additional legal protections.”

Municipal leaders and law enforcement may take advantage of loopholes in order to prevent marijuana use. In particular, they may crack down on drivers who have THC in their system. This practice is biased and unfair, as THC can stay in a user’s system for up to a month.

When using marijuana, it’s crucial that you avoid using it in your car – even if you are parked. Additionally, it’s best to keep the smell of marijuana out of your car. If pulled over, police may attempt to use this as evidence against you.

An attorney can help you navigate the law

If you are a caregiver or plan on distributing cannabis products in Michigan, it’s crucial that you speak to an attorney who will leave no stone unturned while helping you navigate the law. This can help you avoid uphill legal battles, as well as unfair treatment in the justice system.

If you are a medical patient or recreational user, and you’re facing a DUI or drug charges, contact an experienced criminal defense attorney as soon as possible. There may be some areas of the law that are unclear or poorly written.

See the video below: