Flint Administrative DUI License Suspensions: What are Your Rights? 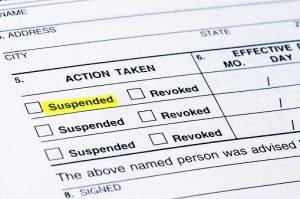 In Flint and throughout Michigan, refusal to submit to a test of bodily alcohol content (BAC) can trigger an automatic license suspension. The Michigan Department of State notes Michigan's implied consent laws require the automatic administrative suspension of your license for a one year period of time. This suspension is separate from any type of criminal proceedings against you for driving under the influence.

A criminal defense attorney can challenge this suspension. You have to request a hearing within 14 days of the date of the arrest. Your attorney will assist you in filing the request for the hearing and in making an argument about why your license should not be lost.

An Illegal Traffic Stop and an Administrative License Suspension

Implied consent laws exist nationwide, so it is not just Michigan drivers who get their license suspended automatically if they refuse a BAC test. One driver in North Carolina recently challenged her administrative license suspension on the basis that her traffic stop was illegal. Her challenge led to an important court decision that shows how courts are reducing Fourth Amendment protections in DUI cases and in other criminal cases.

The North Carolina driver was stopped in her blue SUV. The police officer stopped her vehicle because a driver had called in to the police to report that an SUV of the same color, make and model was driving erratically and weaving. The law enforcement officer did not actually see the driver of the blue SUV do anything dangerous. In fact, she was driving just fine at the time when the officer observed her, but she was pulled over anyway based on the phone call tip.

After she'd been pulled over, the SUV driver was accused of smelling like alcohol and asked to take a field sobriety test. When she did not pass this, she was asked to submit to a BAC test. She declined, was arrested, and subsequently subject to an administrative driver's license suspension.

The criminal case against her had to be dismissed due to lack of evidence because the traffic stop was found to have been a violation of her Fourth Amendment rights. None of the evidence collected could be used against her since it was all illegally obtained.

The DMV, however, said that the agency could still use the evidence as justification for her administrative license suspension because the exclusionary rule didn't apply to the DMV's proceedings. While the trial court said that this was not correct, the North Carolina appellate court agreed with the DMV and allowed the license suspension based on the evidence obtained in violation of her Fourth Amendment rights.

Obviously, the implications of this decision are troubling for every DUI defendant nationwide even though the specific court's decision applies only in North Carolina. A driver should not have his license suspended based on the information obtained in a traffic stop that was not justified and that was a violation of constitutional rights.

Contact Michigan criminal defense lawyer Michael P. Manley today at (810) 238-0500 or visit bvimanleystg.wpengine.com to schedule a consultation. Serving Flint and all of Michigan.