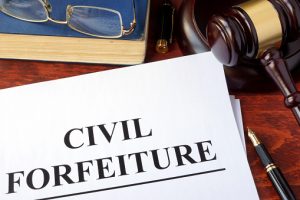 The U.S. Attorney General announced changes to civil forfeiture rules several months ago in response to complaints that people were having their property taken unjustly. These changes, however, applied only to a very small number of instances of civil forfeiture that may affect people in Detroit, Flint and all of Michigan. Federal agencies still have the power to take people's property without due process and without the usual requirement that someone be found guilty of a crime before being deprived of money or assets.

Criminal defense lawyers know civil forfeiture results in law enforcement agencies seizing billions of dollars of money and other assets over the course of the year. People whose property is taken face a very difficult time getting their money or other assets back. This is true even if those whose property is taken aren't ever formally charged with a criminal offense. While attorneys can help clients accused of crimes, and can provide assistance in civil forfeiture cases, getting money back can actually be harder than avoiding conviction when facing criminal charges.

Civil Forfeiture Results in Billions of Losses to Innocent Victims

Civil forfeiture allows the DEA and other federal agencies to take money if there is reason to believe the money came from criminal activity. The money is presumed to be ill-gotten when it is taken. This turns the presumption of innocence in criminal cases on its head. The prosecutor does not have to prove any crimes -- the person who is trying to get money or property back has to prove that the money was obtained through legitimate sources. This can be hard to do.

The Washington Post recently demonstrated just how egregious the practice of civil forfeiture can be. One man was traveling from outside of Detroit to Los Angeles with $16,000 in a bank envelope. He had taken the money, his life savings, out of the bank before relocating to LA because he had previously had a hard time getting cash from banks when he was out of state. He was going to LA to try to fulfill his dream of getting into the music video business.

Police boarded the Amtrak train he was on, and they asked if they could search his bags. They found the money and did not believe his story about it being his life savings, even after calling his mother who corroborated the story. They claimed the cash was from drug trading, despite the young man having no guns or drugs in his possession and no evidence of any drug crimes being committed.

The young man is now fighting to try to get his money back. Many people whose property and assets are taken are forced to wage lengthy court battles to try to get back money that law enforcement took. Many, like the man in the Post's story, have not ever been charged with a crime. The practice of civil forfeiture under these circumstances is abusive and those who are victimized need to get legal help from an experienced attorney.

Contact Michigan criminal defense lawyer Michael P. Manley today at (844) 462-6539 or visit bvimanleystg.wpengine.com to schedule a consultation. Serving Flint and all of Michigan.